It was early (MT 28:1) on the first day of the week. Several women set out to meet at the sepulchre to embalm the Shubiha. 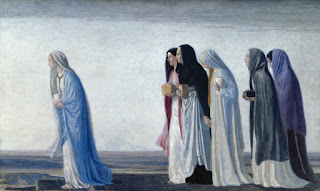 MARY'S REPORT (MT)
First to arrive at the sepulchre was Mary and the other Mary (Mother Clopas). Just like on Preparation day, the Earth quaked again as They saw an angel descend from heaven to roll the stone away to the right. (MT 28:2-3) The guards became like dead men. (MT 28:4) 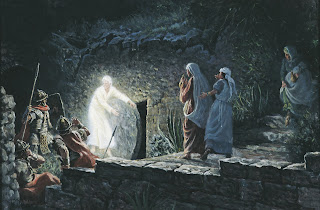 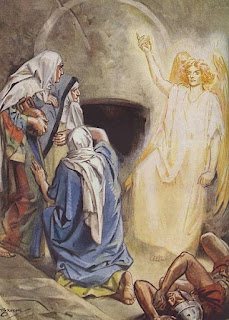 MAGDA'S REPORT (MT, JN)
While it was yet still very overcast (JN 20:1), Magda arriving a little behind them sees the Sepulchre open where Salome and Mary ran to tell her they dont know where the Shubiha is. 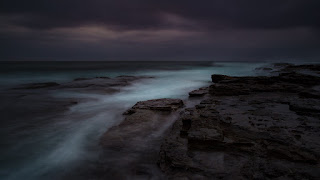 Mary & Magda silently hurry to tell the Talmidim in Jerusalem (JN 20:2) leaving Mother Clopas and James's Mother by the Sepulchre. 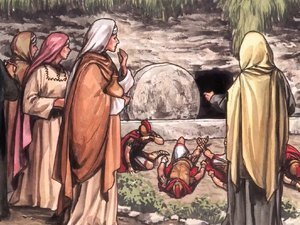 JOANA'S REPORT (LK)
Next, Joana arrives in the morning (LK 24:1) and enters the Sepulchre with Mother Clopas and James's Mother where they see two more angels appear inside to tell them the news. 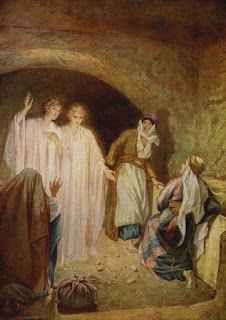 PETER ARRIVES (LK, JN)
The women silently hurry and tell the 11 Apostles and others. (LK 24:3-9) Joana goes on after Salome while Mother Clopas and James's Mother meet Peter and Jacmes Lazarus already running back to the Sepulchre (JN 20:3-5) with Mary & Magda. Peter then Jacmes Lazarus enter the Sepulchre. It's not clear if they saw the two angels present, but they believe the news (JN 20:6-9) 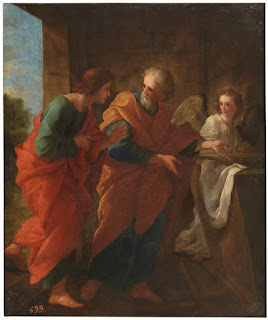 Simon Peter accompanies Mother Clopas to a gathering on the Emmaus road while Jacmes Lazarus accompanies his Mother home to the brethren in Bethany where they prepare to leave for Galilee.

HE APPEARS (MT, MK, JN)
Before leaving with Mary, Magda sees the two angels in the Sepulchre who ask her why she crys and Magda replies. 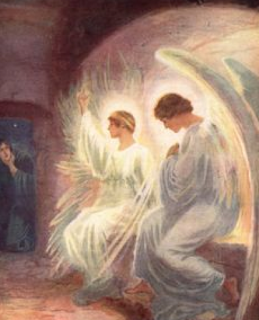 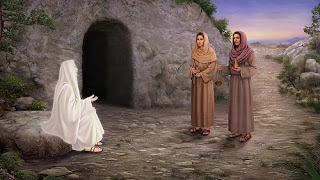 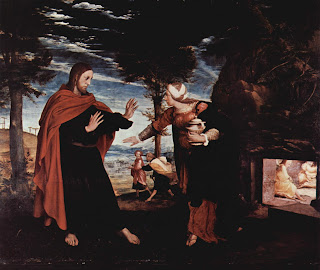 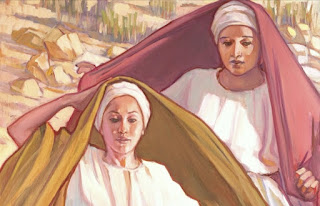 GUARDS BRIBED (MT)
Meanwhile the guards had rushed to tell the chief priests what they had witnessed (MT 28:11-16) 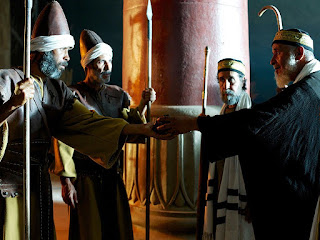 EMMAUS (MK, LK, JN, PL)
Rebbe Melekh haMashiakh reveals Himself in a different way when He finds Peter & Mother Clopas on the Emmaus road but they don't see it's Him as He instructs them on the road. 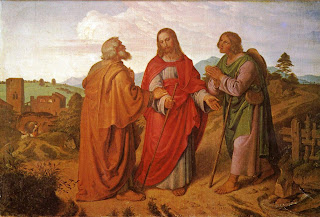 He then stops with them and the other women in the house on the Emmaus road and when those disciples assembled had shut the doors for fear of the Jews, He stands among them and breaks bread. He gives them peace, shows them His hands and side, again gives them peace, commissions them, breathes Holy Spirit on them and gives them authority to forgive or withhold before ascending. 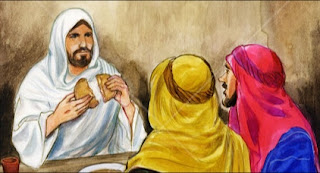 After talking about it, two of them walk two hours back to tell Matthias and the 10 in Jerusalem. They tell them that the reports are true and Rebbe Melekh haMashiakh has also been seen by Simon Peter. 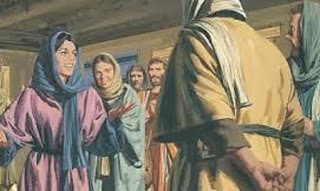 HE RETURNS (MT, MK, LK, JN, PL)
Though Thomas says he can't believe it because He wasn't with them, they do all agree to go to Galilee together where Matthias and the 11 all meet Rebbe Melekh haMashiakh when he descends to them the following Sunday and he had some broiled fish and honeycomb to eat before appearing to over 500 people at the same time. 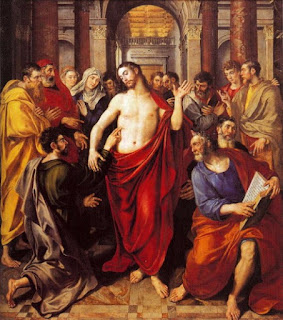 JACMES (JN, PL)
Then His beloved disciple Jacmes Lazarus, His brother, saw Him on the shore of Tiberias. 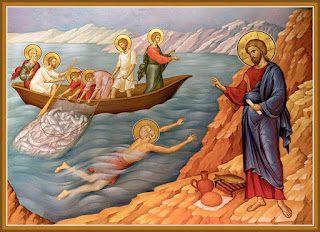 ASCENSION (MK, LK)
40 days after the resurrection his Shubiha and Word ascended. 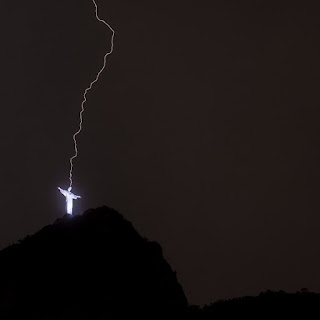 PENTECOST (LK, PL)
Then He sent the gift of His Word to all Disciples at Pentecost. 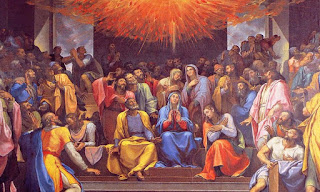 SAUL (LK, PL)
Then His Word and Name appeared to Saul of Tarsus. 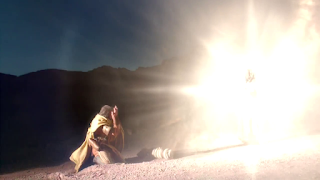 JOHN (JN)
And He sent His Word and Name again to John on the Island of Patmos. 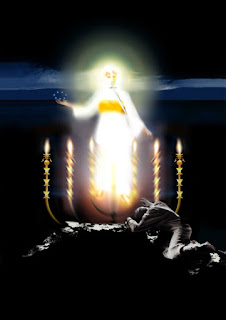 And thus His Word and Name remain so with us still until His Shubiha returns with Power and Glory. 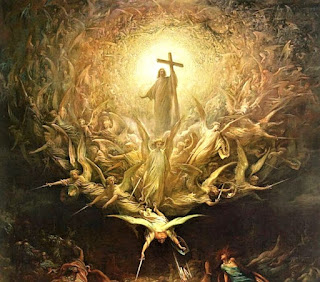